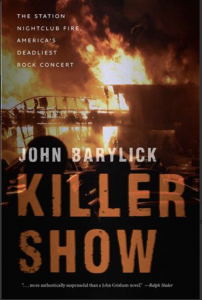 This original documentary presents the deeply personal stories of lives forever altered by the tragic Station nightclub fire that left 100 people dead, more than 200 injured, and devastated the tight-knit community of West Warwick, Rhode Island. It is also a story of the triumph of the human spirit, as seen in a community’s resilience and the recovery and rebirth of Joe Kinan, who was the last survivor pulled from the fire and the
most severely burned.

America’s Deadliest Rock Concert: The Guest List is partially based on the book, “Killer Show: The Station Nightclub Fire, America’s Deadliest Rock Concert,” written by John Barylick. who is a producing partner of the documentary and an attorney/law professor in Rhode Island. His book is regarded as the first and most comprehensive exploration of the chain of events leading up to the fire, as well as its legal and human aftermath.