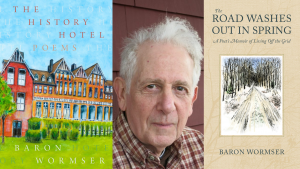 Baron Wormser, whose essays have appeared in Best American Essays, checks in with love and betrayal, hope and despair in his eleventh poetry collection, The History Hotel.  On the other hand, The Road Washes Out in Spring, touches on feelings of community, isolation, nature, civilization, and poetry.

In Baron Wormser’s eleventh poetry collection, The History Hotel, the historical circumstances that touch, anneal, shatter, and buttress a life are paramount. We all live in the History Hotel where love and betrayal, hope and despair go hand in hand where showing those entangled hands is the work of these poems.

For nearly twenty-five years, poet Baron Wormser and his family lived in a house in Maine with no electricity or running water. They grew much of their own food, carried water by hand, and read by the light of kerosene lamps. “When we look for one thread of motive,” he writes, “we are, in all likelihood, deceiving ourselves.” His refusal to be satisfied with the obvious explanation, the single thread of motive, makes him a keen and sympathetic observer of his neighbors and community, a perceptive reader of poetry and literature, and an honest and unselfconscious analyst of his own responses to the natural world. The result is a series of candid personal essays on community and isolation, nature, civilization, and poetry. This new edition of the Road Washes Out in Spring has a new preface by the author.

Baron Wormser is the author of twenty books including novels, a memoir, a book of short stories, two coauthored books about teaching poetry, and many books of poetry. Essays of his appeared in Best American Essays 2014 and 2018. He has received fellowships from the National Endowment for the Arts and the John Simon Guggenheim Memorial Foundation. From 2000 to 2005, he served as poet laureate of the state of Maine and received an honorary doctor of humane letters degree from the University of Maine at Augusta. He is the founder of the Frost Place Conference on Poetry and Teaching.

BOOK LAUNCH: “Sculpting a Life” by Paula Birnbaum From Proposal to Bookshelf: An Inside Look at the Business of Book Publishing
Scroll to top