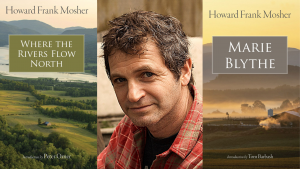 Peter Orner, a three-time recipient of the Pushcart Prize, is the author of six books, including Esther Stories, a finalist for the PEN/Hemingway Award. The recipient of the Rome Prize, a Guggenheim Fellowship, and a Fulbright to Namibia, Orner directs the creative writing program at Dartmouth College.

On February 9th, author Peter Orner will speak on the legacy of the late author Howard Frank Mosher’s fiction at the Norwich Bookstore in Norwich, VT. The talk will be held in celebration of two of Mosher’s titles, Where the Rivers Flow North and Marie Blythe, new editions of which were released this past fall. In the span of his esteemed, four decade career, Mosher published 13 books of fiction, each attuned to the complex beauty of the remote Northeast Kingdom where he made his home. Orner draws attention to these details in his introduction to Where the Rivers Flow North, honoring Mosher as a singular talent — an overlooked artist perfectly positioned for a contemporary renaissance.

The stories of Where the Rivers Flow North are “superior work, rich in texture and character,” says the Wall Street Journal, and “the novella is brilliantly done.” That novella, the title story of the collection, was also made into a feature film starring Rip torn and Michael J. Fox. These six stories, available again in this new edition, continue Howard Frank Mosher’s career-long exploration of Kingdom Country, Vermont. “Within the borders of his fictional kingdom,” the Providence Journal notes, “Mosher has created mountains and rivers, timber forests and crossroads villages, history and language. And he has peopled the landscape with some of the truest, most memorable characters in contemporary literature.” This new edition features a new introduction by novelist Peter Orner.

Howard Frank Mosher was one of the best-loved writers of northern New England. One of his most vivid and memorable characters is Marie Blythe. At the dawn of the twentieth century, a young girl immigrates to Vermont from French Canada. She grows up confronting the grim realities of life with an indomitable spirit—nursing victims of a tuberculosis epidemic, enduring a miscarriage alone in the wilderness, and coping with the uncertainties of love. In Marie Blythe, Mosher has created a strong-minded, passionate, and truly memorable heroine. This edition features a new introduction by novelist Tom Barbash.