VIRTUAL TALK | “Belonging and Betrayal: How Jews Made the Art World Modern,” with author Charles Dellheim

In the late 19th and early 20th centuries, a host of Jewish outsiders came to play a critical role in modern art as dealers, collectors, critics, and, not least, as artists. This talk looks at the role of Jews in modern art by focusing on the stories of a few remarkable individuals and how and why they gravitated to different schools of modern art, how they championed the work of avant-garde artists, how their efforts were regarded and received, and what happened to them and their collections after the Nazi rise to power and the outbreak of the Second World War.

Presented as part of the Yiddish Book Center’s 2023 Decade of Discovery Yiddish: A Global Culture.

This live event will be presented via Zoom. Space is limited. If you’d like to reserve a virtual seat in the Zoom audience—registration is required. 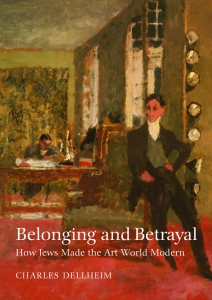