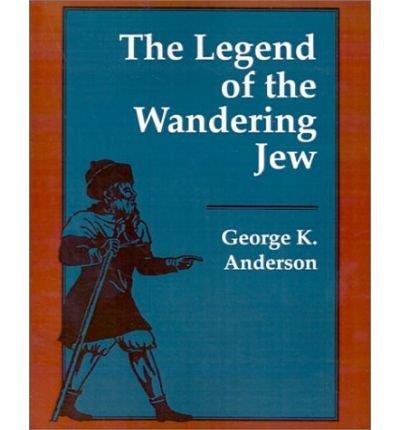 The Legend of the Wandering Jew

Purchase
Overview
When Christ, wearied by the heavy burden of the cross, leaned for a moment against a stranger’s doorway, the stranger drove him away and cried, “Walk faster!” To this, Christ replied, “I go, but you will walk until I come again!” So began the legend of the Wandering Jew, which has recurred in many forms of literature and folklore ever since. George K. Anderson, in a book first published in 1965 and immediately hailed as a classic, traces this enduring legend through the ages, from St. John through the Middle Ages to Shelley, Eugène Sue, and the antisemitism of Hitler to recent movies and novels. Though the main elements of the legend are a constant, Anderson shows how changes in emphasis and meaning reflect civilization’s shifting concerns and attitudes over time.
Reviews (5)

Anderson, writing with liveliness and humor, takes Ahasuerus [the Wandering Jew’s most common name] from his house on the road to Golgotha, where he was condemned to endless walking, through centuries to come and climes unknown (one being the moon). Beginning with the Middle Ages the legend developed, reflecting the Zeitgeist and social conditions, and followed the main stream of European history, down to the anti-Semitism of our own times.
—Choice

[Anderson’s] study asks good questions at this juncture in space and time, when the National Archives is collecting tweets and people are wondering whether their Facebook profiles might be given to historians after they pass away. Anderson’s extended essay provides a useful starting point to consider these issues (of our digital legacies) and our role as media historians in the early twenty-first century. Ultimately, he is right in suggesting that new media technology can help, and not hinder, how historians shape and share their inquiries into the past (and thus into the present).
—H-Net

… In the enchanted plainsong of these seasoned, measured poems, the ultimate intimacy of consciousness achieves a lucidity so deeply truthful that it becomes the mythic.
—Eleanor Wilner

I love how this book moves from the personal to the public, from the private room of the heart where losses are conferred, to the world’s stage of mindless, unaccountable war.…The vulnerability in these poems is real, but so is the hope.
—Maurice Manning

GEORGE K. ANDERSON, a renowned Anglo-Saxon scholar, was Professor of English at Brown University, where he taught for 45 years. Aided by a Guggenheim Fellowship, Anderson spent 20 years researching the legend of the Wandering Jew. His other books include The Literature of England (1979) and a translation of The Saga of the Volsungs (1982).