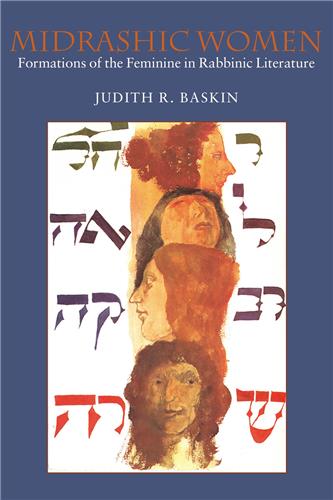 Midrashic Women: Formations of the Feminine in Rabbinic Literature

Purchase
Overview
While most gender-based analyses of rabbinic Judaism concentrate on the status of women in the halakhah (the rabbinic legal tradition), Judith R. Baskin turns her attention to the construction of women in the aggadic midrash, a collection of expansions of the biblical text, rabbinic ruminations, and homiletical discourses that constitutes the non-legal component of rabbinic literature. Examining rabbinic convictions of female alterity, competing narratives of creation, and justifications of female disadvantages, as well as aggadic understandings of the ideal wife, the dilemma of infertility, and women among women and as individuals, she shows that rabbinic Judaism, a tradition formed by men for a male community, deeply valued the essential contributions of wives and mothers while also consciously constructing women as other and lesser than men. Recent feminist scholarship has illuminated many aspects of the significance of gender in biblical and halakhic texts but there has been little previous study of how aggadic literature portrays females and the feminine. Such representations, Baskin argues, often offer a more nuanced and complex view of women and their actual lives than the rigorous proscriptions of legal discourse.
Author Bio

JUDITH R. BASKIN is Director of the Harold Schnitzer Family Program in Judaic Studies and Professor of Religious Studies at the University of Oregon. She is author of Pharaoh’s Counsellors (1983) and editor of Jewish Women in Historical Perspective (Second edition, 1998) and Women of the Word: Jewish Women and Jewish Writing (1994).