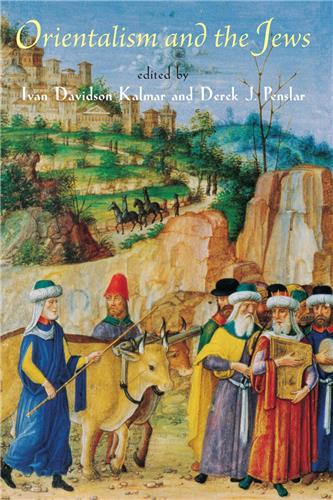 Purchase
Overview
At the turn of the twenty-first century, in spite of growing globalization there remains in the world a split between the West and the rest. The manner in which this split has been imagined and represented in Western civilization has been the subject of intense cross-disciplinary scrutiny, much of it under the rubric of “orientalism.” This debate, sparked by the 1978 publication of Edward Said’s Orientalism identifies the “Orient” as the Islamic world and to a lesser extent Hindu India. “Orientalism” signifies the way the West imagined this terrain. Going beyond Said’s framework, in their introduction to the volume, Kalmar and Penslar argue that orientalism is based on the Christian West’s attempts to understand and manage its relations with both of its monotheistic Others—Muslims and Jews. According to the editors, Jews have almost always been present whenever occidentals talked about or imagined the East; and the Western image of the Muslim Orient has been formed and continues to be formed in inextricable conjunction with Western perceptions of the Jewish people. Bringing together essays by an array of international scholars in a wide range of disciplines, Orientalism and the Jews demonstrates that, since the Middle Ages, Jews have been seen in the Western world as both occidental and oriental. Jews formed the model for medieval depictions of Muslim warriors. Representations of biblical Jews in early modern Europe provided essential sustenance for Western fictions about the Muslim world. And many of the Western protagonists of imperialism “discovered” real or imaginary Jews wherever their expeditions took them. Today orientalist attitudes by Israelis target not only Arabs but also the mizrahi (“oriental”) Israelis with roots in the Arab world as Others.
Look Inside (1)
Table of Contents

A stunning example of the productive engagement of Jewish history with postcolonial studies.
—American Historical Review

Inspired by Edward Said’s Orientalism, the 12 contributors to this book analyze from anthropological, cultural, historical, literary and religious perspectives how Jews fit into the Western imagining of the Orient, both intellectually and popularly.
—Journal of Palestine Studies

De Haan’s Orientalism did not provide a way out for the Jews of Palestine since, among other things, it made no allowance for the Arabs’ legitimate aspirations for independence from the British. But Zionist Occidentalism has not provided a way out either. Rather than siding with the East or the West, perhaps the real aim should be to rise above both.
—The Nation

IVAN DAVIDSON KALMAR is Associate Professor of Anthropology at the University of Toronto. His publications include The Trotskys, Freuds, and Woody Allens: Portrait of a Culture (1994). DEREK J. PENSLAR is Zacks Professor of History and Director of the Jewish Studies Program at the University of Toronto. His most recent publication is Shylock’s Children: Economics and Jewish Identity in Modern Europe (2001).