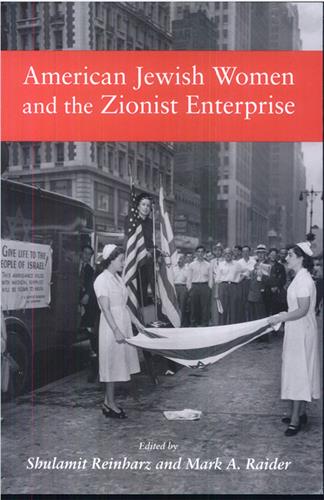 Shulamit Reinharz and Mark A. Raider

Purchase
Overview
Despite a historical record that shows sustained involvement of American Jewish women with early Zionism and Palestine, this topic has received scant scholarly attention. A major contribution to Zionist history, women’s history, and American history, American Jewish Women and Zionism offers a much needed clarification to the historical record. Divided thematically, American Jewish Women deals with representative figures, events, and themes of the pre-state era. The essays in the book have three different foci: Several are concerned with significant personalities, such as Golda Meir, Marie Syrkin, Emma Lazarus, and Henrietta Szold, while others are concerned with the pivotal role played by American Zionist women’s organizations including Hadassah, the Pioneer Women’s Organization (later Naamat), the Mizrachi Women’s Organization (later Amit Women), and others. The remaining essays address broad themes and reveal the multidimensionality of the relationship of American Jewish women and Zionism, which includes agricultural and vocational training, religion, ideology, geography, and feminism and femininity. American Jewish Women and Zionism also includes several eyewitness documents and personal testimonies. No less significant than the corpus of memoirs and literature produced by male Zionist leaders, such data throws light on hitherto neglected facets of American Jewish and Zionist history, including the variety of roles played by Zionist women and their self-awareness as participants in one of the most dramatic and consequential episodes in the history of Jewish civilization. The volume includes a glossary of terms, a map of the principal locations referred to in the text, illustrations, and a timeline of American Jewish women and their relationship to Zionism. Each section opens with a prefactory note that places the essays in historical context. It concludes with a bibliographic note and suggestions for further readings.
Author Bio

SHULAMIT REINHARZ is the founding Director of the Hadassah-Brandeis Institute, Jacob Potofsky Professor of Sociology, Brandeis University, and General Editor for the Brandeis Series on Jewish Women. MARK A. RAIDER is Associate Professor of Modern Jewish History, Chair of the Judaic Studies Department, and Director of the Center for Jewish Studies, University of Albany. He is co-editor of The Plough Woman (UPNE/Brandeis, 2002) and the author of The Emergence of American Zionism (1998).