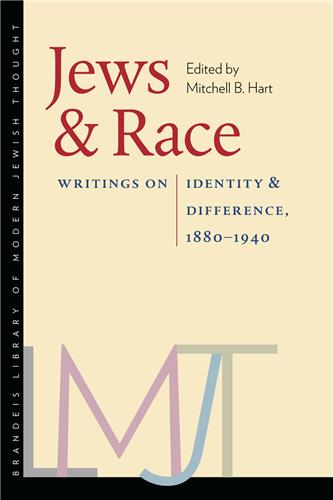 Edited by Mitchell B. Hart

Purchase
Overview
Many people think of Jews as victims of a particular sort of racism, not as active participants in the development of racial thinking in the nineteenth and twentieth centuries. Yet many Jews did take up racial discourse and used it to analyze Judaism, Jewish history, and the contemporary condition of world Jewry. Race discourse generated by Jews was in part apologetic, a response to racial antisemitism; however, it also served other political and ideological needs. Focusing primarily on works written at the height of the racial hygiene and eugenics movements in Europe and North America, this diverse anthology shows how Jewish scholars and popular writers in Europe, North America, and Palestine developed racial interpretations of Judaism and Jewish history, thereby raising fascinating and thorny issues about the nature and history of racial discourse in Europe and America. Designed for class adoption, the volume contains annotations and an introduction by the editor.
Author Bio

MITCHELL B. HART is professor, Department of History, and Alexander Grass Chair in Jewish Studies at the University of Florida. He is the author of The Healthy Jews: The Symbiosis of Judaism and Modern Medicine and Social Science and the Politics of Modern Jewish Identity.