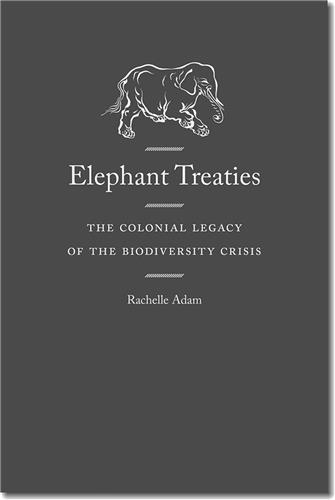 Elephant Treaties: The Colonial Legacy of the Biodiversity Crisis

Purchase Book
Overview
Based on a legal history of international biodiversity treaties from the late nineteenth century to the present, Rachelle Adam argues that today’s biodiversity crisis is rooted in European colonial history, especially in the conservation treaties that the colonial powers (and their non-governmental counterparts) negotiated to protect Africa’s big-game animals. Reflecting on the colonial past—particularly on efforts to manage the commerce in elephant ivory—Adam sheds light on why more recent attempts to arrest the decline in biodiversity by way of international agreement have failed. This volume will spur a rethinking of such agreements and trigger a search for alternatives outside of existing international structures.
Look Inside (0)

RACHELLE ADAM served as the legal advisor of Israel’s Ministry of the Environment from 1989 to 2008. Since then, she has been visiting researcher at Boston College Law School and Harvard Law School.