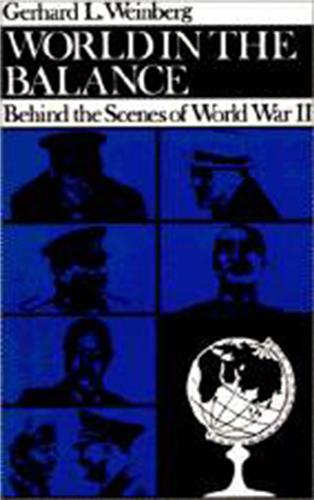 World in the Balance: Behind the Scenes of World War II

Series: The Tauber Institute Series for the Study of European Jewry
Paper: $19.95

Purchase
Overview
The purpose of Weinberg’s text is to suggest a way in which the dramatic events of World War II may be seen. Weinberg argues that the war must be seen as a whole, and that the presentation of it in discrete segments covering the European and Pacific portions separately distorts reality and obscures important aspects of the war on both sides of the world. In addition, any understanding of the great struggle requires a mental self-liberation from the certain knowledge of its outcome. In desperate struggles millions fought and died, hopeful or fearful--or both--but without awareness of the end.
Author Bio

GERHARD WEINBERG is William Rand Kenan, Jr. Professor of History at the University of North Carolina at Chapel Hill. He spent several years in the early 1950s as Research Analyst for Columbia University’s War Documentation Project and was the first Director of the American Historical Association Project for Microfilming Captured German Documents. Among his books are the award-winning Foreign Policy of Hitler’s Germany (2 volumes, 1970 and 1980), Germany and the Soviet Union, 1939-1941 (1954), and Hitlers zweites Buch (1961).