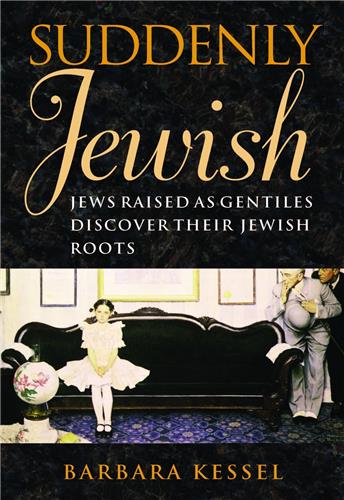 Purchase
Overview
One woman learned on the eve of her Roman Catholic wedding. One man as he was studying for the priesthood. Madeleine Albright famously learned from the Washington Post when she was named Secretary of State. "What is it like to find out you are not who you thought you were?" asks Barbara Kessel in this compelling volume, based on interviews with over 160 people who were raised as non-Jews only to learn at some point in their lives that they are of Jewish descent. With humor, candor, and deep emotion, Kessel's subjects discuss the emotional upheaval of refashioning their self-image and, for many, coming to terms with deliberate deception on the part of parents and family. Responses to the discovery of a Jewish heritage ranged from outright rejection to wholehearted embrace. For many, Kessel reports, the discovery of Jewish roots confirmed long-held suspicions or even, more mysteriously, conformed to a long-felt attraction toward Judaism. For some crypto-Jews in the southwest United States (descendants of Jews who fled the Spanish Inquisition), the only clues to their heritage are certain practices and traditions handed down through the generations, whose significance may be long since lost. In Poland and other parts of eastern Europe, many Jews who were adopted as infants to save them from the Holocaust are now learning of their heritage through the deathbed confessions of their adoptive parents. The varied responses of these disparate people to a similar experience, presented in their own words, offer compelling insights into the nature of self-knowledge. Whether they had always suspected or were taken by surprise, Kessel's respondents report that confirmation of their Jewish heritage affected their sense of self and of their place in the world in profound ways. Fascinating, poignant, and often very funny, Suddenly Jewish speaks to crucial issues of identity, selfhood, and spiritual community.
Author Bio

BARBARA KESSEL is Director of Administration of the Board of Jewish Education of Greater New York. A freelance writer of nonfiction and poetry for 25 years, her work has appeared in The New York Times, Hadassah Magazine, and Midstream.