“Strikingly original. Lehman brings to bear a feminist lens to demonstrate how one group of men (the rabbis) critiques and wrestles with the legacy of another group of men (the priests). Feminist attention to the constitutive relationships of the household (husband-wife, father-son, mother-son) illuminates the anxieties and tensions that play out as the rabbis claim the mantel of religious leadership from their priestly rivals.”
-- Elizabeth Shanks Alexander

Overview
A feminist project that privileges the Babylonian Talmudic tractate as culturally significant. While the use of feminist analysis as a methodological lens is not new to the study of Talmudic literature or to the study of individual tractates, this book demonstrates that such an intervention reveals new perspectives on the rabbis’ relationship with the temple and its priesthood. More specifically, through the relationships most commonly associated with home, such as those of husband-wife, father-son, mother-son and brother-brother, the rabbis destabilize the temple bayit (or temple house). Moving beyond the view that the temple was replaced by the rabbinic home, and that rabbinic rites reappropriate temple practices, a feminist approach highlights the inextricable link between kinship, gender and the body, calling attention to the ways the rabbis deconstruct the priesthood so as to reconstruct themselves.
Reviews (4)

“Happy families may all be alike, but the priestly family is unhappy in its own ways, shows Marjorie Lehman in her fine-grained readings of Babylonian Talmud Tractate Yoma. Lehman’s story is one of patriarchy and hierarchy, but also of vulnerability and reflection, as the tractate turns towards the practices of self-affliction that, until today, characterize the day of atonement. Tractate Yoma reads, if not quite like a novel or poem, then like a series of meditations on the shifting meanings of home and the anxieties about continuity and control. You will leave Bringing Down the Temple House never thinking the same way again about ‘the house’ as a Jewish cultural topos.”
—Beth Berkowitz, Barnard College, author of Animals and Animality in the Babylonian Talmud

“Strikingly original. Lehman brings to bear a feminist lens to demonstrate how one group of men (the rabbis) critiques and wrestles with the legacy of another group of men (the priests). Feminist attention to the constitutive relationships of the household (husband-wife, father-son, mother-son) illuminates the anxieties and tensions that play out as the rabbis claim the mantel of religious leadership from their priestly rivals.”
—Elizabeth Shanks Alexander, author of Gender and Timebound Commandments in Judaism

“Lehman persuasively demonstrates that the theme ‘house’ runs uniquely and distinctively through Bavli Tractate Yoma, read holistically as a self-contained literary unit. With an erudite combination of academic Talmud criticism and feminist and gender analysis, Lehman shows the many gendered paths Bavli Yoma takes to disconnect the rabbinic ‘house’ from a Temple ‘house’ for which she perceptively detects a lack of rabbinic nostalgia.”
—Alyssa Gray, Professor of Rabbinics, Hebrew Union College-JIR

“Through insightful analyses, compelling argumentation, and beautiful prose, Lehman mines Tractate Yoma’s structure, content, and imagery to reveal the intricate connections that the rabbis drew between gender, the home, and the temple. A model of what can be learned when we read the Talmud as literature and bring feminist analysis to ancient texts, and an absolute pleasure to read.”
—Sarit Kattan Gribetz, Fordham University, author of Time and Difference in Rabbinic Judaism

Marjorie Lehman is associate professor of Talmud and Rabbinics at The Jewish Theological Seminary. She is the author of The En Yaaqov: Jacob ibn Habib's Search for Faith in the Talmudic Corpus (Wayne State University Press, 2012). The book was a finalist for the National Jewish Book Award–Nahum Sarna Memorial Award in the Scholarship category. Recently she co-edited two books, both of which were finalists for the National Jewish Book Award: Mothers in the Jewish Cultural Imagination (Littman Library of Jewish Civilization, March 2017) and Learning to Read Talmud (Academic Studies Press, 2016). 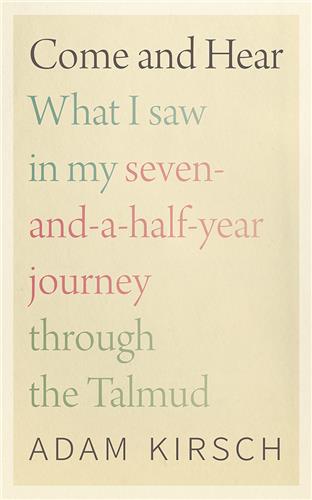