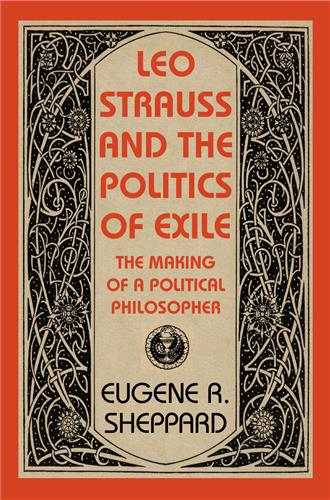 Leo Strauss and the Politics of Exile: The Making of a Political Philosopher

Series: The Tauber Institute Series for the Study of European Jewry
E-book: $45.99

Purchase
Overview
Born in rural Hesse, Germany, Leo Strauss (1899–1973) became an active Zionist and philosopher during the tumultuous and fractious Weimar Republic. As Eugene R. Sheppard demonstrates in this groundbreaking and engaging book, Strauss gravitated towards such thinkers as Franz Rosenzweig, Martin Heidegger, and Carl Schmitt as he sought to identify and overcome fundamental philosophical, political, and theological crises. The rise of Nazism impelled Strauss as a young Jewish émigré, first in Europe and then in America, to grapple with—and accommodate his thought to—the pressing challenges of exile. In confronting his own state of exile, Strauss enlisted premodern Jewish thinkers such as Moses Maimonides and Baruch Spinoza who earlier addressed the problem of reconciling their competing loyalties as philosophers and Jews. This is the first study to frame Strauss’s political philosophy around his critique of liberalism and the problem of exile. Sheppard follows Strauss from Europe to the United States, a journey of a conservative Weimar Jew struggling with modern liberalism and the existential and political contours of exile. Strauss sought to resolve the conflicts of a Jew unwilling to surrender loyalty to his ancestral community and equally unwilling to adhere to the strictures of orthodox observance. Strauss saw truth and wisdom as transcending particular religious and national communities, as well as the modern enlightened humanism in which he himself had been nurtured. In his efforts to navigate between the Jewish and the philosophical, the ancient and the modern, Berlin and New York, Strauss developed a distinctively programmatic way of reading and writing “between the lines.” Sheppard recaptures the complexity and intrigue of this project which has been ignored by those who both reject and claim Strauss’s legacy.
Author Bio

EUGENE R. SHEPPARD is Associate Professor of Modern Jewish History and Thought and Associate Director of the Tauber Institute at Brandeis University.