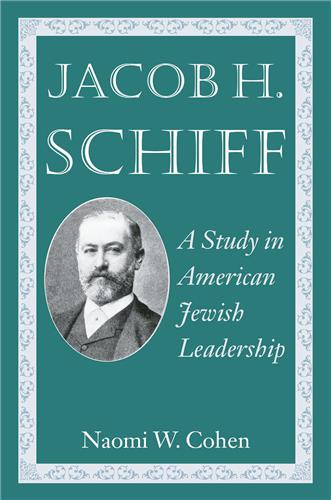 Purchase Book
Overview
The life of Jacob Schiff (1847 - 1920), banker, financier, and leader of the American Jewish community from 1880 to 1920, is in many ways the quintessential story of an immigrant's success in America. Born in Frankfurt in 1847, Schiff worked in several financial firms in Germany and the US before accepting a position at the New York banking firm of Kuhn, Loeb & Company in 1875 and settling for good in America. Part of a wealthy and powerful German Jewish circle that included the Warburgs and Rothschilds, Schiff played a central role in shaping American and European Jewish history. From his base on Wall Street, he was the foremost Jewish leader in what became known as the "Schiff era," grappling with all major issues and problems of the day, including the plight of Russian Jews under the czar, American and international anti-Semitism, care of needy Jewish immigrants, and the rise of Zionism. Based on a broad range of primary sources, Naomi W. Cohen's study emphasizes the role Schiff played as the preeminent leader of American Jewry at the turn of the century.
Look Inside (2)
Table of Contents
Preface

Winner of several American Jewish book awards, NAOMI W. COHEN's books include Jews in Christian America (1992) and The Year After the Riots (1988). She lives in Jerusalem.