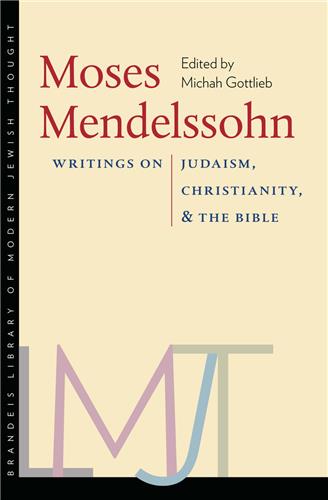 Moses Mendelssohn: Writings on Judaism, Christianity, and the Bible

Purchase
Overview
German Jewish philosopher Moses Mendelssohn (1729–1786) is best known in the English-speaking world for his Jerusalem (1783), the first attempt to present Judaism as a religion compatible with the ideas of the Enlightenment. While incorporating much of Jerusalem, Michah Gottlieb’s volume seeks to expand knowledge of Mendelssohn’s thought by presenting translations of many of his other seminal writings from the German or Hebrew originals. These writings include essays, commentaries, unpublished reflections, and personal letters. Part One includes selections from the three major controversies of Mendelssohn’s life, all of which involved polemical encounters with Christian thinkers. Part Two presents selections from Mendelssohn’s writings on the Bible. Part Three offers texts that illuminate Mendelssohn’s thoughts on a diverse range of religious topics, including God’s existence, the immortality of the soul, and miracles. Designed for class adoption, the volume contains annotations and an introduction by the editor.
Author Bio

MICHAH GOTTLIEB is an assistant professor in the Skirball Department of Hebrew and Judaic Studies, New York University.