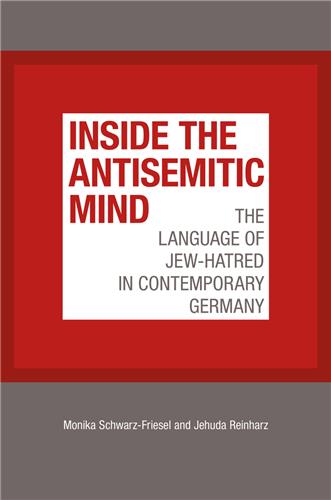 Inside the Antisemitic Mind: The Language of Jew-Hatred in Contemporary Germany

Purchase Book
Overview
Antisemitism never disappeared in Europe. In fact, there is substantial evidence that it is again on the rise, manifest in violent acts against Jews in some quarters, but more commonly noticeable in everyday discourse in mainstream European society. This innovative empirical study examines written examples of antisemitism in contemporary Germany. It demonstrates that hostility against Jews is not just a right-wing phenomenon or a phenomenon among the uneducated, but is manifest among all social classes, including intellectuals. Drawing on 14,000 letters and e-mails sent between 2002 and 2012 to the Central Council of Jews in Germany and to the Israeli embassy in Berlin, as well as communications sent between 2010 and 2011 to Israeli embassies in Austria, Switzerland, Belgium, England, Ireland, the Netherlands, Sweden, and Spain, this volume shows how language plays a crucial role in activating and re-activating antisemitism. In addition, the authors investigate the role of emotions in antisemitic argumentation patterns and analyze “anti-Israelism” as the dominant form of contemporary hatred of Jews.
Look Inside (2)
Table of Contents
Introduction

Monika Schwarz-Friesel and Jehuda Reinharz’s inquiry into “verbal anti-Semitism” in present-day Germany offers a ... nuanced and disturbing picture: anti-Semitism is at home in the mainstream of German society and politics. ... The strength of the book ... is in its inquiry into the ramifications of antisemitism in today’s Germany.
--Holocaust and Genocide Studies

One of the great achievements of “Inside the Antisemitic Mind” is its scientific corroboration based on an extensive analysis of rich empirical data. The authors draw a clear distinction between criticism and antisemitic demonization of the Jewish state that applies classic anti-Jewish themes. ... Providing its readers with important insights into the evolution and adaptation of antisemitic ideas, the book greatly adds to a better understanding of the persistence, variety and dispersion of anti-Semitism.
--Jerusalem Post

The strength and power of “Inside the Antisemitic Mind” is its capacity — and here linguistics and cognitive science help — to portray the language and mindset of antisemites in the moment of their regeneration in our time. The authors proceed with a set-up that is both capacious, in that the study allows for the maximum exposure of anti-Semitic statements, and ingenious in that it proceeds from a discussion of anti-Semitic stereotypes to their articulation as “anti-Israelism“ to their emotive and cognitive dimensions.
--Antisemitism Studies

The great merit of the authors is their systematic survey of a frightening phenomenon that had been regarded as vanquished in Germany following Auschwitz. Where does it come from, where will it lead? The two authors have brought the concealed to the light of day and broken new ground. The book is a great scholarly work.
--Josef Joffe, publisher-editor of Die Zeit, and distinguished fellow, Stanford University

(The book) is an absolute groundbreaker in anti-Semitism research. Such a detailed study based on linguistic analysis has never been done before. The book makes a highly significant contribution to the discussion on anti-Semitism, but not just in Germany alone.
--Yehuda Bauer, Professor of Holocaust studies, Hebrew University

The interdisciplinary and corpus-based study of current patterns of anti-Semitic language usage provides insight into the mental and affective fundaments of modern Judeophobia. Anyone engaged with anti-Jewish attitudes today must take note of this book.
--Michael Brenner, professor of Jewish history and culture, LMU Munich

The first systematic analysis of anti-Semitic ideas and language in the 21st century, this work breaks new ground. The book is an indispensable contribution to the interdisciplinary study of anti-Semitism in contemporary society.
--Lars Rensmann, professor of European politics and society, University of Groningen (Netherlands)

MONIKA SCHWARZ-FRIESEL holds the chair in general linguistics at the Technical University Berlin. She is the author of several books on antisemitism and the power of language. JEHUDA REINHARZ is Richard Koret Professor of Modern Jewish History and director of the Tauber Institute for the Study of European Jewry at Brandeis University. He is the president of the Mandel Foundation.