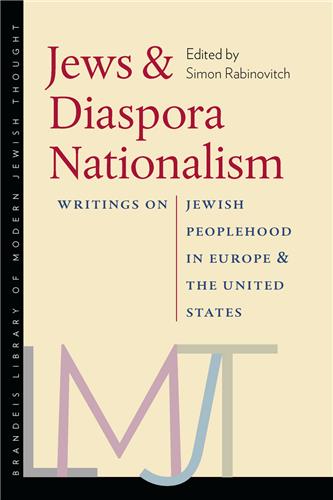 Jews and Diaspora Nationalism: Writings on Jewish Peoplehood in Europe and the United States

Purchase Book
Overview
The question of how to preserve, construct or transform Jewish peoplehood consumed Jewish intellectuals in the late nineteenth and early twentieth centuries. Despite a rich array of writing from Jewish nationalists, liberals, and socialists about the vitality of Jewish existence in the diaspora, the key works have never been collected in a single volume, and few reliable English translations exist. This anthology brings together a variety of thinkers who offered competing visions of peoplehood within the established and developing Jewish diaspora centers of Europe and America. Writing in Russian, Yiddish, Hebrew, French, and English, these Jewish intellectuals sought to recast Jewish existence, whether within multiethnic empires, liberal democracies, or socialist forms of government, in national terms. Volume editor Simon Rabinovitch provides an introductory essay, as well as short introductions and annotations to each document that contextualize and make accessible this wealth of primary sources for scholars and students.
Look Inside (0)