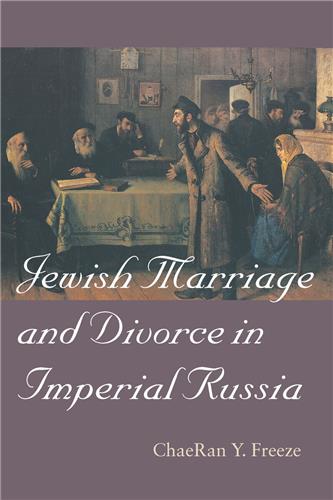 Purchase
Overview
ChaeRan Freeze explores the impact of various forces on marriage and divorce among Jews in 19th-century Russia. Challenging romantic views of the Jewish family in the shtetl, she shows that divorce rates among Russian Jews in the first half of the century were astronomical compared to the non-Jewish population. Even more surprising is her conclusion that these divorce rates tended to drop later in the century, in contrast to the rising pattern among populations undergoing modernization. Freeze also studies the growing involvement of the Tsarist state. This occurred partly at the behest of Jewish women contesting patriarchy and parental power and partly because the government felt that Jewish families were in complete anarchy and in need of order and regulation. Extensive research in newly-declassified collections from twelve archives in Russia, Ukraine, and Lithuania enables Freeze to reconstruct Jewish patterns of marriage and divorce and to analyze the often conflicting interests of Jewish husbands and wives, rabbinic authorities, and the Russian state. Balancing archival resources with memoirs and printed sources in Hebrew, Yiddish, and Russian, she offers a tantalizing glimpse of the desires and travails of Jewish spouses, showing how individual life histories reflect the impact of modernization on Jewish matchmaking, gender relations, the "emancipation" of Jewish women, and the incursion of the Tsarist state into the lives of ordinary Jews.
Author Bio

ChaeRan Y. Freeze is Assistant Professor in Near Eastern and Judaic Studies at Brandeis University. Jewish Marriage and Divorce in Imperial Russia was a 2000 recipient of the Koret book publication grant.